Why Celestavia now vs. ten years ago? Now there is a convergence of technologies that makes Celestavia possible much more than before. For example, computers have dropped in price to the point that artificial intelligence software is inexpensive enough to be used to manage multiple functions in the Celestavia system, such as optimizing the use of chassis and car cabins; these are piloted by the artificial intelligence, therefore, reducing the total cost of the project by n million dollars and accidents and errors that human drivers cause. Motor controllers and cable carriers have dropped in price and weight, and quality has increased significantly. New technologies such as high performance capacitors are now available in the market at reasonable prices, which greatly reduces power consumption. The cost of exotic materials such as fibers has dropped in price enormously, allowing the use of fiber instead of metals; which Celestavia uses extensively in everything from cabs, chassis, to towers and stations. 3D printers produce better parts and at a fraction of the previous cost including building construction. This means that Celestavia can use 3D printers for faster and better construction of the stations and other components. Sensors, large computer monitors, 5G communication, rapid prototypes via new software and 3D printing, and many other technologies converge to produce a practical, economical, clean and safe system.

Why Celestavia now? Simply because the founding engineers immigrated from the US and lived for more than twenty years in the province of Loja, Ecuador, a typical south american city. Seeing the incredible increase in pollution in the environment from gases harmful to health due to the use of fuels, noise pollution, deaths and injuries from accidents, traffic jams causing extreme unnecessary expense in the transportation system. The founding engineers decided to offer the Celestavia Rapid Transit System as a modern and complete solution that solves all these problems.

Is Celestavia a disruptive technology?  Yes, with Celestavia there will be to be many fewer ill people caused by environmental  pollution from the use of fuels, injured and dead from traffic accidents; this will affect medical institutions which treat the injured; a total reduction in traffic police; a reduction of new routes  since they are no longer necessary; car sales may decrease; car and bus  parking lots will be available for other uses that are more productive and  beneficial to humanity; bus carriers and everything related to bus transportation will decrease; everything related to fuel will  undergo great changes; we will stop poisoning our lungs with this poison  that is so harmful to our health. The environment will benefit like  never before possible, as the footprint of Celestavia is only 1/500 of  the current roads.

It is noteworthy to mention that in any case, autonomous cars, trucks and buses have already walked more than one billion kilometers on roads.

Celestavia is a disruptive technology to the current transportation system.  As a point of reference, take into account a couple of examples of disruptive technology: Amazon, Alibaba, Uber, Airbnb, Cellular Telephony and Internet, Cable TV, Internet, Fiber Optics, are excellent examples of very disruptive technologies. These disruptive technologies on the one hand give us an optimal service like never before, but on the other hand cause a great change to the current technology/service. For example, telephone booths and public telephones ceased to exist in very few years. We completely stopped using the phone booth system, now we only use the cell phone. Even Cyber Cafes are starting to disappear, as we have internet on the cell phone. In 2018 Amazon surpassed 50% of all sales nationwide in the U.S. That is, more than 50% of all sales of a population of more than 300 million people went to just one company called Amazon, this effect we are also starting to see  all over the world. Alibaba in just one day sold more than $50,000,000,000 via its website. The Celestavia transportation system, like these companies, is a completely disruptive technology to the current transportation system. For this reason, since Celestavia as a transportation company is unusually profitable, economically it can and is committed to provide assistance to carriers, so that this disruption to the carrier’s source of income does not suffer irreparable damage as has happened with all these other companies without the slightest social commitment. At Celestavia we are not only looking out for our personal interests and those of the investors, but we also take into account all those who will be negatively affected.  See FAQ Converging technologies.

Will the fact that Celestavia is such a disruptive technology to the current system cause resistance from carriers?  Yes and No. If the transporter and suppliers are not educated about the immense economic, social and environmental potential that Celestavia offers us all, they may present resistance due to their ignorance and fear of losing their source of income. But, if the carrier realizes that by investing in Celestavia now it can multiply its income enormously and live a better quality of life, then it will not only support, it will become a promoter of Celestavia technology. Additionally, most people have good values, and they know well that Celestavia is for the good of all, including the environment and for the bad of no one.

Will Celestavia replace the roads?  The current roads will continue for many years, but in the future it is very possible and very probable that humanity will decide to give a better use to this space that is destroying the environment throughout the planet.

Does the level of automation that Celestavia offers seem too futuristic? That is not the case. Here is an example of complementary and similar technologies already in use: In a test of the Starship system alone in 2016, more than 50,000 packages were delivered in one hundred cities and twenty countries. This is the real state of last mile delivery technology. – In the very near future, you will be able to buy via the internet and receive delivery at your door via Celestavia.

What is the convergence of technologies? Today we have the convergence of various technologies that did not exist before and cost reduction like never before on a variety of components and technologies for rapid design and prototyping, enabling cost reduction like never before. For example, the quality of electric motors has increased enormously, today an electric motor is not only many times smaller than before, but also includes a long life like never before; It has electronic sensors to detect vibration, temperature, energy consumption, that provides information in real time of all its mechanical state, in this way the end user will never have the inconvenience of being in a vehicle that does not work, because maintenance in Celestavia is scientifically predictive via many sensors. The electronic communication network technology via fiber-optic and radio communication of 5G (fifth generation) in conjunction with thousands of sensors in the towers, chassis and carts / cabins allows us to monitor tens of thousands of parameters in real time; something that today is very inexpensive and easy to implement. Some of the computers that Celestavia will use cost under $5, something that in the past not only cost thousands of dollars, but was the size of a cart / cabin, but today it is only a centimeter in size and in just a couple grams of weight. The power of the convergence of inexpensive sensor technology, computers with artificial intelligence overseeing the use of the thousands of carts / cabins and chassis is made possible by the exponential reduction of costs that has happened in the past years, in everything related to computers and communication in real time at very low costs. Artificial intelligence allows a reduction of the total number of chassis and trolleys / cabs in the system, which translates into millions of dollars of savings in not only the number of chassis and trolleys / cabs, but in the total electricity consumption, maintenance, parking, etc. Not only does it reduce all costs, but it also ensures that carts / cabins are available when needed, thus saving the passenger time. The fact that today an electronic camera connected to the communication network only costs a couple of dollars, allows us to monitor and control in real time hundreds of thousands of parameters simultaneously at an affordable cost. Each chassis contains four propulsion motors, with a long list of sensors, which goes to a computer that electronically controls each motor independently, thus ensuring the ideal movement for each motor and therefore the chassis moves in a controlled manner. safe, without human intervention or help, thus ensuring a very low accident rate. There are many more technologies to list here that converge to make the entire Celestavia system today much more economically feasible and as never before possible. Among the technologies not mentioned are the 3D printing of the stations, the extensive use of basalt fibers, the 3D printing of many components in the towers, chassis, cabins, passenger assistance systems, the design of the entire mechanical system with design software; something that was impossible to do before, and much more … 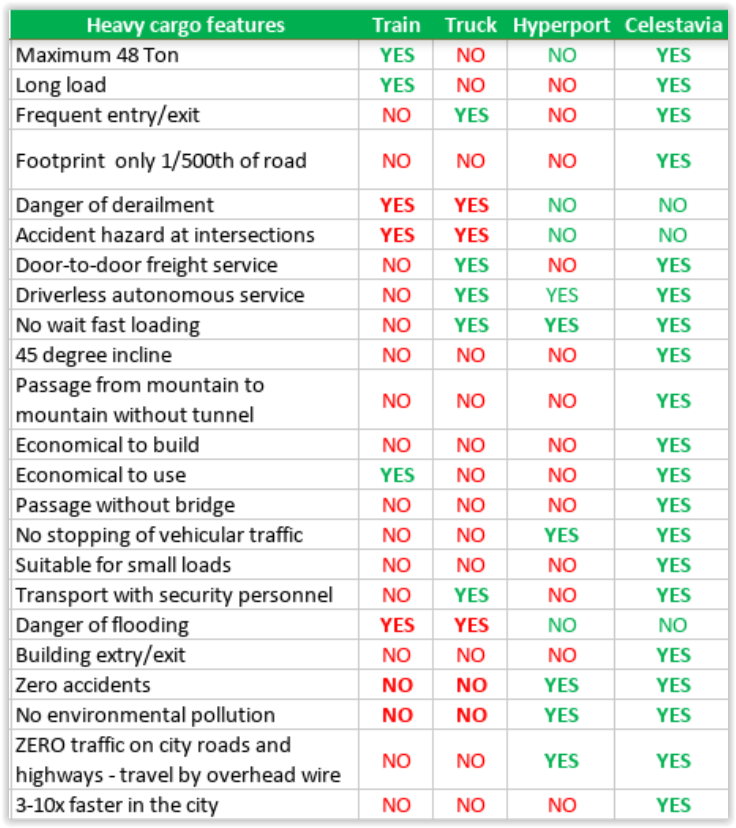 What next-generation technologies are converging to make Celestavia possible today vs. a simple cable car?  The number of new technologies converging today is staggering, lowering all project costs, from design to installation to operation and maintenance. Something impossible, only twenty years ago.

Your feedback has been received.